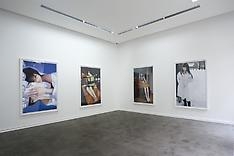 JGM. Galerie is proud to announce an exhibition of new works by Laurie Simmons which opens September 4, 2010.

The show is titled “The Love Doll: Days 1-17” and includes eight large scale photographic works which feature an anatomically correct “Real Love Doll” discovered by Laurie Simmons during an extended stay in Japan in 2009. The images depict the lifelike latex doll in an ongoing series of actions and portraits organized by date, beginning with the week that Simmons received the doll (October 19, 09) through May 13, 2010.
The photos reveal the relationship that unfolds between Simmons and the doll as her subject becomes more familiar to her. The first days depict the doll in the plain white cotton chemise she was wearing the day she arrived from Japan –her poses feel both formal and shy.
One can observe Laurie Simmons’ ever increasing familiarity with the doll as she continues her investigation of potential postures, clothing and hairstyles. There is a growing sense of discomfort as one senses a grown up playing “dolly” with a grown up doll.
The “Love Doll” photographs are a continuation of the artist ongoing exploration of human surrogates through her use of dolls, puppets, mannequins and ventriloquist dummies. This is the first time Simmons has worked with a human scale doll and she turns her own home into a life size dollhouse. The “Love Doll” is not only a reminder of Laurie Simmons past examination of the dollhouse and it’s occupants but also engages with adult fantasies infused with an even more potent sense of desire and regret.
Once again the artist creates an atmosphere where the psychological as well as political parti pris are playing with photography’s propensity to objectify the female image. This time she turns her eye on the way the not quite real woman /child has come to portray the image of an adult woman in the media. Through the combination of Laurie Simmons’ childhood memories and the doll’s implied role-play, the dreamlike photographs produce an eerie, disturbing, yet somewhat seamless reality – a place of sexual innuendo that is neither home nor theatre.
Laurie Simmons’ work, in all its playfulness and fantasy, is primarily characterized by the establishment of an environment where surface and façade (interior design, fashion and décor) become exalted states of being equal to or surpassing human emotion – at least the human emotion emanating from her doll.