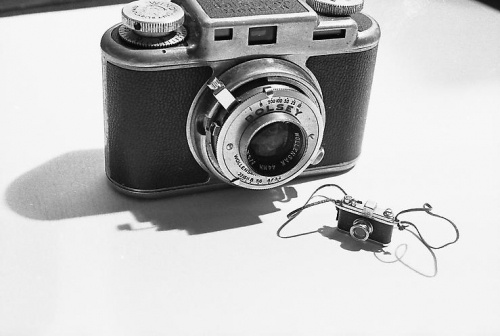 New York photographer Laurie Simmons, known for her ability to craft an image both familiar and uncanny, is the focus of a new exhibition opening March 19 at The New York Public Library. Picture Perfect: Laurie Simmons, Photographs 1976-1978 is on view March 19 through May 23, 2010 in the Print Gallery (3rd floor) of the Stephen A. Schwarzman Building located at Fifth Avenue and 42nd Street. Admission is free.

Laurie Simmons has explored the theme of the figure in domestic space for more than thirty years, beginning with this series of fifty-six black-and-white photographs from the late 1970s. Initially collecting props and miniatures with the goal of being a commercial photographer of children's toys, Simmons soon realized she could use these small items to dramatize and investigate both ordinary truths and dark secrets beneath the picture-perfect veneer of domestic life. The resulting staged photographs are playful, funny, sinister, and touching. A tiny pair of plastic heels exquisitely framed by shadows; a doll seemingly lost in reverie at the kitchen table; and another sitting rigid in a dining chair – all of these images expose the ways in which the media shape our collective memory.

Simmons first treated this material as a cohesive project in a brief artist's book titled In and Around the House in 1983. Twenty years later, in 2003, she expanded the series in a revised edition of that book to include the selection displayed here. Of the original ten sets of fifty-six vintage gelatin silver prints, only four have remained intact. The New York Public Library's Miriam and Ira D. Wallach Division of Art, Prints and Photographs, which recently acquired the last of these sets, is the only U.S. collection to own the full series; another set is owned by the Goetz Collection in Munich, and two other sets are in private hands. The exhibition was organized by Stephen C. Pinson, the Library's curator of photography.